I’ve developed quite a few WebRTC applications over the last three years and noticed that as ML-based features arrive on almost every popular application one way or another, there’s been an increase on feature requests that involve speech to text, sentiment analysis, natural language understanding and computer vision.

Almost every time one of these features is implemented it requires a considerable amount of engineering resources, probably because the available tools have a steep learning curve or aren’t a good match for the specific use case.

TL; DR: The complete source code can be found on this repo.

Pion WebRTC, an easy to use WebRTC library

While developing WebRTC apps. that require more features than a typical video conference there are quite a few tools on the WebRTC space that can help, however, they could be tricky to use (there’s dedicated guide on how to build the WebRTC Native API) or hard to extend. That’s the reason I felt the Pion WebRTC library was like a breath of fresh air, developed in Go, almost identical API as the browser’s (which may not feel completely idiomatic in Go, but that’s a subject for some other time) and pretty easy to use overall.

Here’s a sample of all it takes to create a PeerConnection, feed it an SDP offer and get an SDP answer back.

It’s pretty straight forward if you ask me.

Show me the code (structure)!

We’ll build a single server to handle the signaling and the webrtc traffic, this ideally would be split into two microservices since it’s very likely that both will have different scale needs on a more realistic scenario.

The server will expose a (very) simple REST API on port 9000, there’s a single POST /session endpoint that receives an SDP offer and returns an SDP answer. Every time a client (browser) invokes the endpoint, the server creates a new PeerConnection that’s ready to receive an audio track.

If the WebRTC connection is established the server’s peer connection will trigger an OnTrack event, letting the application code know that there’s a new track. If it’s an audio track we dispatch a new Goroutine that:

If the explanation from above wasn’t overly clear, hopefully the next diagram explains it better.

What’s the purpose of this?

It is true that using WebRTC to stream audio to a backend isn’t the only way to do speech to text on a realtime stream, after all nothing stops me from hooking up a ScriptProcessor to a local audio MediaStreamTrack using the WebAudio API to stream the raw audio using a WebSocket connection, however, that solution is far from being optimal.

WebRTC uses the Opus codec to encode audio data, Opus is designed specifically with voice encoding (wideband) in mind, this means that we’re using a lot less bandwidth if we send the audio through WebRTC. Opus also implements error correction in case some packets are lost, which make the codec ideal for streaming voice.

How does it look?

The project also includes a sample of how to use the speech to text server. If you got the project running locally it should be enough to navigate to http://localhost:9000 and press the Start button, speak a little and then press the Stop button.

If this is the first time you access the microphone through that URL the browser will show a dialog asking for permission. 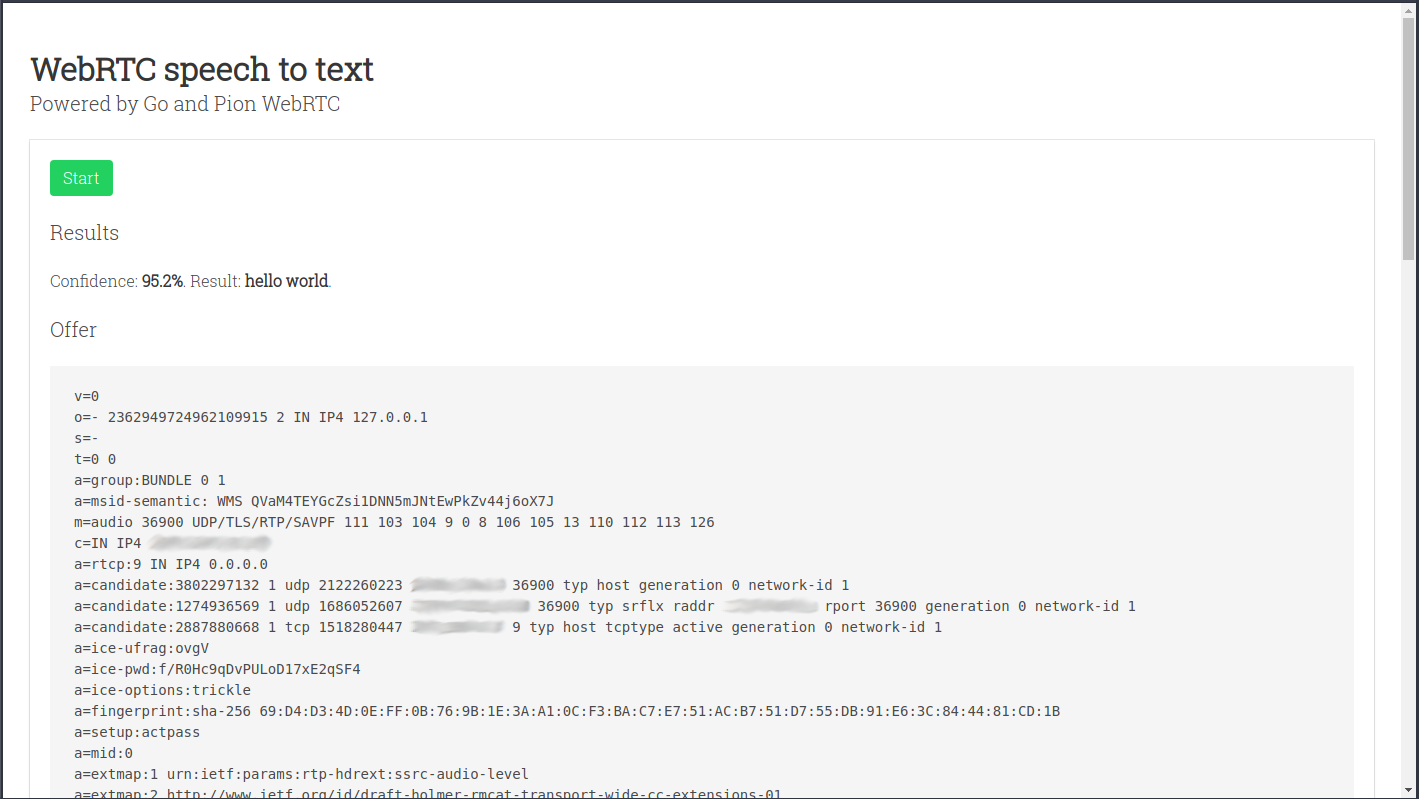 The recognition results should appear after the Results header, the text shown below Offer and Answer are the SDPs that were exchanged with the server. Here’s some recommended reading if you want to get a better understanding of what’s happening.

That’s all for now, there’s another blog post in the works were we’ll do some primitive voice detection to work around the Google Speech limitation of 60 seconds on streaming recognition.